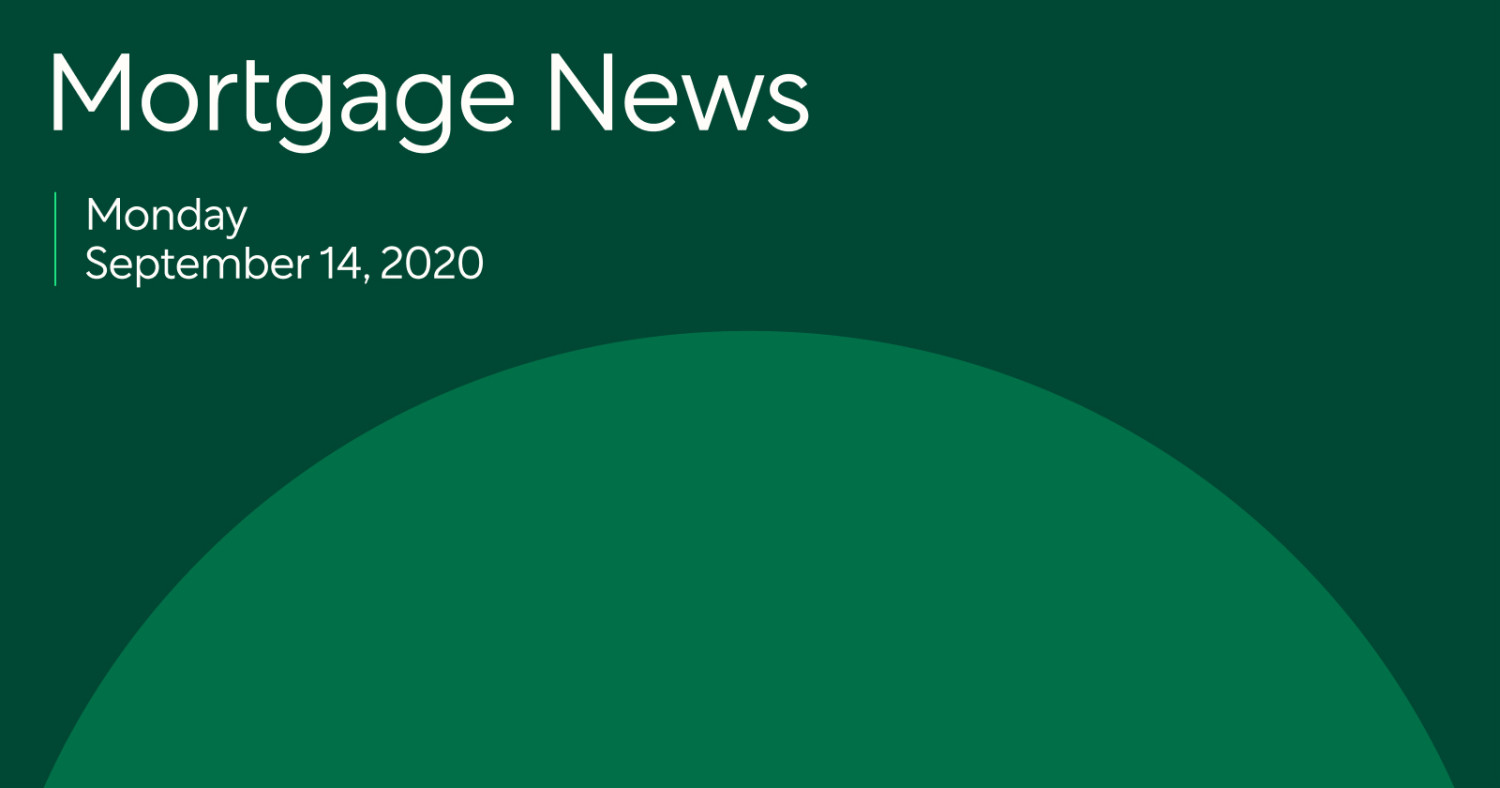 Here’s a look at the latest developments in the mortgage market for the week beginning 9/14/20.

19.3 million homeowners may be eligible to save by refinancing

Mortgage rates continue to hit record lows, allowing homeowners the opportunity to save on their monthly payments by refinancing. There are now 19.3 million homeowners nationwide that have the potential to save according to recent data from mortgage firm Black Knight totaling $5.8 billion in savings or an average of $299 per month, per borrower. Of the 19.3 million about 7 million homeowners could save $300 per month, and almost 2.5 million could save $500.

While the current rate environment gives homeowners the opportunity to save, the Federal Housing Finance Agency’s (FHFA) will be applying a 0.5% fee to refinances in December. Many lenders will adjust their pricing to include the fee before the end of the year, so eligible borrowers are encouraged to lock in a rate soon in order to save on their monthly payments and avoid the additional fee altogether.

Confidence is rising on both sides of the housing market

The Fannie Mae Home Purchase Sentiment Index (HPSI), which measures housing attitudes and perceptions on the housing market, increased 3.3 points to 77.5 in August, reaching its highest level since the pandemic. Despite its current level, the index was down 16.3 points compared to last August, when sentiment reached 93.8 points. While lower than the year prior, outlook is increasing month-over month indicating that buyers and sellers are feeling more optimistic.

Specifically, 59% of people believe it’s a good time to buy a home. According to Fannie Mae, the HSPI’s rise was caused by record low mortgage rates that restored consumer positivity, while also improving the good-time-to-sell sentiment.

As of July, the number of young adults between the ages of 18 and 29 living with their parents has reached 52%—exceeding records set during the Great Depression and Great Recession. Due to skyrocketing unemployment, half of 18 to 24 year-olds in the workforce reported losing their jobs or taking a pay-cut because of the pandemic. That, combined with the absence of entry-level job openings, has forced many young people to live with their parents in order to save money.

Though the cause was different in 2008, a similar trend is playing out among the younger generation, as the number of households headed by 18 to 29 year-olds dropped by 12% in the wake of the pandemic. In the 10 years after the 2008 financial crisis, the median age of a homebuyer rose from 39 to 48. This trend may continue if affordable housing, especially in the suburbs and rural areas, continues to be rapidly taken by older millennials. Many Gen Z’ers and young Millennials entering the housing market may be met with sky-high housing costs, keeping them out of the market for many years.

Demand for mortgages increased as purchase applications rose 3% at the end of August and were 40% higher than last year as buyers continue to lock in low rates. Similarly, refinance applications went up by 3% during the same time period, overall 60% higher than a year ago.

As rates continue to hover near record lows, borrowers are encouraged to lock in a rate that could lower their monthly payments when it makes sense for their financial situation.

Borrowers have been willing to pay more in points in order to take advantage of record low rates not available pre-pandemic. Among Better Mortgage borrowers, we’ve seen a 13% increase in borrowers paying points. In February, 47% of borrowers opted to pay points compared to 60% in August. In doing so, they were able to lock in a 30-year fixed-rate mortgage at 2% by paying five points, compared to a no points 3.125% rate.

During the mortgage process, borrowers must decide between points and credits. While points allow borrowers to lower their interest rates, it also means paying more at closing. Alternatively, credits result in paying less at closing in exchange for a higher interest rate. Without points, many borrowers would face higher interest rates costing them more over the life of their loan. In order to help borrowers understand the true cost of their loans, our team of experts outlined the difference between credits and points, and how they’re calculated.