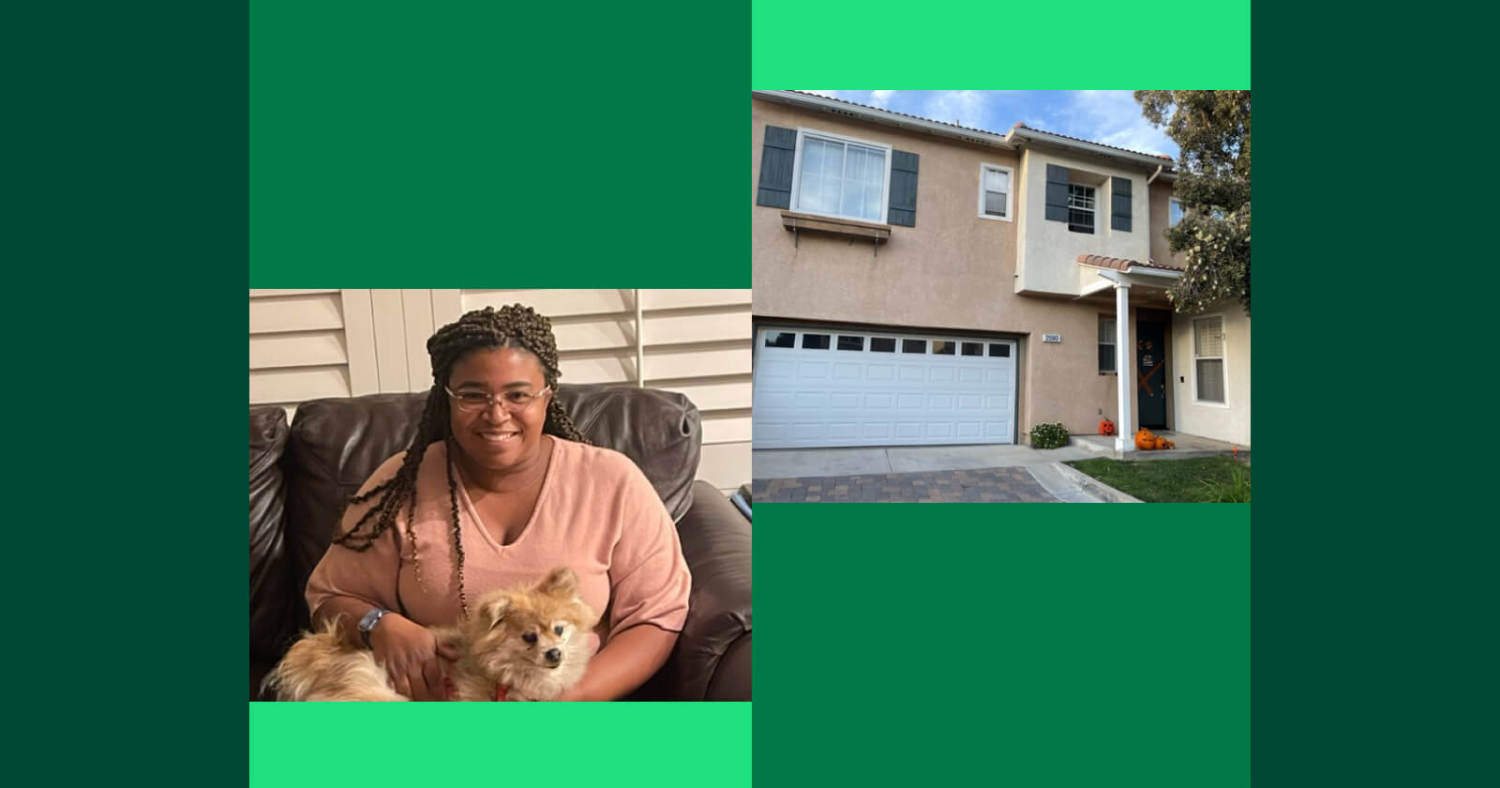 Taisha is easy to talk to, which makes sense considering she’s a doctor. There’s an unfailing smile on her face, even when she’s remembering tough times, and she’s a natural storyteller who answers most questions with a playful refrain: “Do you want the short version, or the long version?”

2020 was a time of intense uncertainty and hardship for most people, including Taisha. Her father had passed away unexpectedly the previous summer, and she was still dealing with the sudden loss. She was also in the midst of an emotionally draining divorce that had undermined her ability to afford the mortgage on her house—a 3,500 square foot home in a neighborhood with competitive schools for her 3 children.

Before the global pandemic even hit, Taisha was managing the grief of losing her parent, her partner, and now her family’s place of residence. To understand how she got through it all, we needed to go back to the beginning.

When asked what she does for a living, she laughs. “What don’t I do?”

Taisha splits her time working as a school psychologist and teaching as an adjunct professor of psychology. She’s been in the field for more than 18 years, and takes pride in helping people while also providing for her family.

“I always wanted to do something with my life. I wanted to give my family a nice stable environment and have a stable job and do something I really love.”

Before she found her professional calling, she explored other career paths including retail, pre-med, and security. She wanted to choose something truly fulfilling. In much the same way, she waited to have kids until she found the right person.

She was already a homeowner when she met and married her husband, but as their family grew Taisha started looking at neighborhoods with more competitive schools. She fell for a home in a charming upper-middle class neighborhood where property price tags were between $700,000—$800,000. Her husband worried they couldn’t afford it, but Taisha was confident—she was working multiple jobs and making good money.

“My dreams were coming true,” said Taisha. “I’d never owned a brand new home before. I had 2 kids and a 3rd on the way. We moved in a day before my birthday. Two months later I had my 3rd baby. This is what I’d worked so hard for.”

That’s the home they were living in right before the pandemic hit. The large mortgage payment had begun to put a lot of stress on her marriage. Then, in the summer of 2019, Taisha’s father passed away. Two days later, her husband said he wanted to get a divorce. Without her husband’s income to help pay for the mortgage, she realized she would have to sell their family home.

“It was a very, very hard time. And we got behind on a couple of months of payments, which messed up my credit,” she explains.

In an already difficult year, Taisha became a single parent. She separated from her husband but was still living with him in the home they had once shared. After putting that house on the market, Taisha began searching for a new one—but everywhere she turned, she seemed to hit a wall. Those missed mortgage payments had affected her credit score and lenders weren’t approving her for a loan.

Timing the purchase of a home when you have to sell your old one is a tricky process, and this was no exception. Knowing she and her kids needed to be out of their current home fast (it was already in escrow), Taisha started looking into apartments as an alternative. Her mortgage payments had been over $4K per month—more than enough to rent a nice apartment for her and the kids, right?

“I’m looking at luxury units, thinking it would be fine,” she remembers. “But with my credit, I kept getting denied. I had 3 jobs at the time, even with the money I was making, I couldn’t get a luxury apartment.” Running out of time and options, she started to panic.

“I’m basically homeless!” she explains. “My home is about to be sold, and we have nowhere to go. I felt like I’d let myself down. I’d always been the one to take care of things. It was the one time I trusted someone else, and it faltered.”

She eventually found an affordable housing option that was willing to approve her for an apartment despite her credit score. She was reluctant—at 1,100 square feet, the place was way too small for a family of 4, and it wasn’t located in a great neighborhood.

“When you work so hard to accomplish so much, you don’t want to go backwards. You want to go forward,” she explains. “It was a humbling moment, but my kids had a roof over their heads.”

Taisha didn’t stay down for long. She moved her family into that apartment in December 2019 and immediately formulated a plan, setting a goal to become a homeowner again by the following December. She started working to repair her credit right away. She used the money from selling her house to pay off a portion of her debt. When the pandemic hit and everyone went into lockdown, she stayed laser-focused on building up her savings.

Finally in the fall of 2020, she had improved her credit score enough to start shopping for houses again. She found a place she wanted to put an offer on...but there were more roadblocks ahead.

For one thing, the courts had been shut down due to COVID-19 and her divorce hadn’t been finalized, which complicated her mortgage applications. She also had significant student loans which impacted her debt-to-income ratio. “I was told I need to find a cosigner.”

A few of her family members were more than willing to help. But when it came right down to it, she realized didn’t want to rely on a co-borrower. She’d gotten her family this far. She wanted to be able to do this herself and she needed to act fast. The owner of the home was getting antsy, putting pressure on Taisha to close. She started looking at other lending options, scrambling to find a path forward.

Taisha already had a loan with Ally Bank, so she reached out to them and learned about a program called Ally, powered by Better. In this case, Better would manage her application, and then process, underwrite, and close her loan. That’s when she met Bethany, a Home Advisor from Better Mortgage.

“I am so grateful to have someone like Bethany fighting for me. I appreciate all of her long hours working on my file, and her advocacy and guidance. We had some bumps along the way to getting this home, but Bethany’s commitment to my dream of getting a home for my kids never wavered.”

The seller set their deadline for a Friday in December 2020, but as it approached, more complications arose. “I called Bethany bawling. We’re going to lose this house! But the contract said they couldn’t do that, so I held my breath. Bethany called me back, worked with the loan processor, and we got it done. The house was mine!”

“When I got the keys, I wanted to kiss the ground,” says Taisha. “Finally I have a place I can call home. We’re in a safe environment, my kids can play outside again after being cooped up. The house is next to a library and a hospital and next to that is the police station! If this isn’t safe, I don’t know what is. I’ll never forget what Bethany did for me and my family.”

“This is what I struggle for, this is why I stay up late and work 3 jobs. It really helped me bring some stability back to my life. A huge weight has been lifted off my shoulders.”

Disclaimer: The story above was presented by Better Mortgage Corporation, NMLS #330511.

Bret Lawrence is a senior copywriter at Better, where she writes about the ins and outs of home financing. Her work also explores the human side of homeownership—the people, places, and perspectives beyond the paperwork. She lives in Queens, NY with her wife and their dog, Banjo.